AMAC Footwear….Soles with a Purpose

We just had to post up and support Austin McAllister and AMAC Footwear. Austin who you may also know from his amazing custom work as AMAC Customs has now launched his own footwear brand.

Now we love the shoes but what we also love is that AMAC Footwear has partnered with Water Wells for Africa to launch a Kickstarter campaign aimed at funding a sneaker that both looks great but via sales of the shoe reduces the number of people dying each year from a lack of clean drinking water. By partnering with the non-profit Water Wells for Africa, AMAC Footwear is able to supply a person in need with 20 years of clean drinking water every time a customer purchases a pair of AMAC Footwear shoes.

NOW WE HAVE TO SWEAR AND SAY THAT IS F%$^ING BIG! WOW!

Get this too Austin is just 19 years old just out of High School! And in the big bucks sneaker industry Austin at just 19 has chosen to get his product into the world by literally building water wells with his shoes! We salute you!

The idea for AMAC Footwear first came to 19-year-old  Austin McAllister after he learned that 3.4 million people die due to a lack of clean drinking water each year.

“After years of collecting sneakers and running a sneaker customizing business, I asked myself what would happen if every shoe ever purchased had supplied clean drinking water to someone who didn’t have any,” says Austin McAllister. “That was ultimately the idea that lead to the creation of AMAC Footwear.”

And as stated above this isn’t Austin McAllister’s first venture in the shoe industry. He has been doing ill custom work from an early age. Now at just 19 he has decided to produce his own shoe.

AMAC Footwear is launching through Kickstarter enabling Austin to spread the mission of AMAC Footwear quickly and to stay connected to customers. Seeing the success of other footwear and fashion Kickstarter campaigns gave Austin the confidence in the viability of the platform for AMAC Footwear.

The shoe being funded by the Kickstarter campaign is called the Katema. It is named after a village in Zambia that Water Wells for Africa is currently helping supply with clean drinking water. Austin designed the Katema himself and hopes the clean silhouette will appeal to a wide cross section of sneaker wearers. The combination of soft gel insoles and flexible rubber base insures that the Katema is not only a good looking shoe, but comfortable as well. These first drops will see both a red and black version. 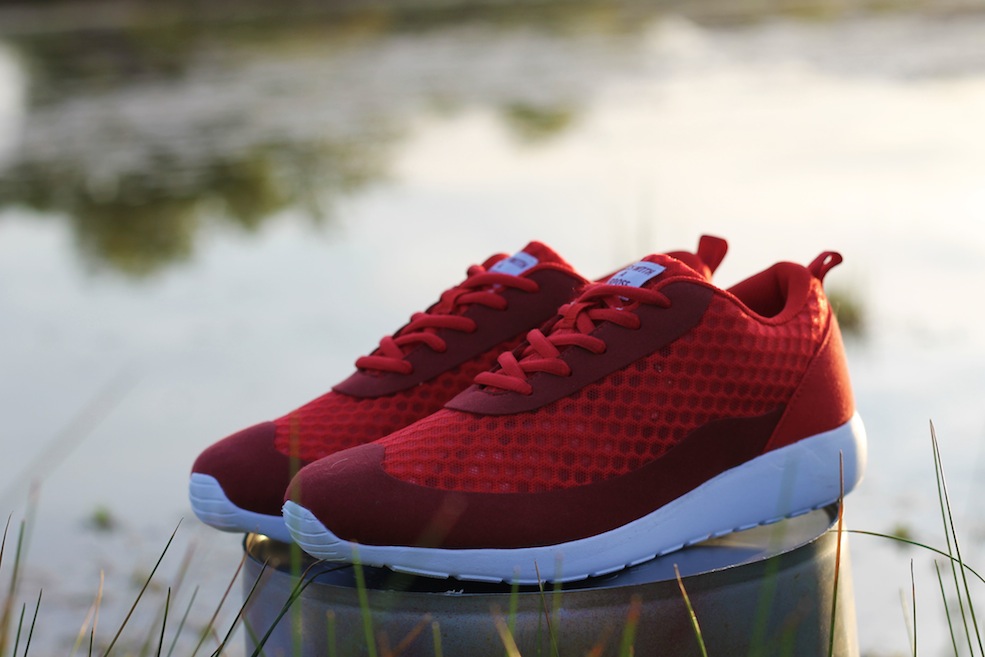 AMAC Footwear launched its Kickstarter campaign on October 15th and plans to meet its goal of $50,000 by November 16th.  If the company meets this goal, over 330 people in need will be supplied with clean drinking water. The profits from the Kickstarter will go directly toward funding the first full production run of the Katema and helping AMAC Footwear expand its retail presence.

Please get involved and get behind AMAC Footwear HERE

We just gotta BIG UP Austin one more time for this amazing initiative so refreshing in an industry where money rules and rarely does that money help anyone in need. We will definitely be backing AMAC with ours…