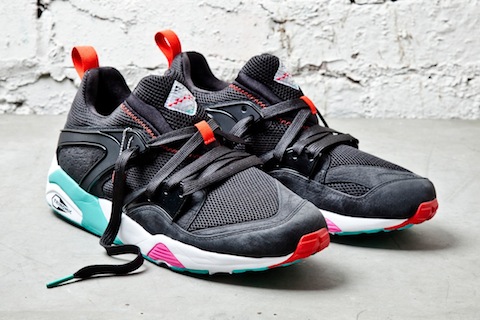 Ok now this is a seriously welcome return. Arguably the best ever makeup in history on the Puma Blaze of Glory and now in a very very short time the Shark is coming back. Sneaker Freaker have done a fair few collabs, nothing on the scale of some in the game, and when they do they are done damn well, well thought out with a theme running through and always a quality mix of colours and materials. And so big ups to Puma and Sneaker Freaker for hitting us with a somewhat updated but very true to the original reissue.

Back in 2008, PUMA dropped two versions of the Blaze of Glory in collaboration with Sneaker Freaker, the ‘Great White’ and the ‘Black Beast’. Yes it was on with the Jaws Shark Attack theme and the original versions were complete with shark tooth jewels, triangular attack logos and even a river of blood on the soles. These came and went like a shark and its prey!

Some five years later, the PUMA x SNEAKER FREAKER Blaze of Glory have cemented their status in the history books as arguably PUMA’s most successful collaboration projects of all time.  We’re not sure a collab has ever had a retro – this might well be a first in sneaker history and the sheer demand and interest in the shoes convinced SNEAKER FREAKER founder Woody that as they say way down below the equator these were a goer.

The Sneaker Freaker crew have made some subtle updates but nothing that’ll really hurt the purists – the lining is now colour coded, the super lush nubuck has been  deeply embossed to give it that shark skin texture and they’ve slotted in a performance insole for a comfier ride.  But they’ve kept those shark tooth jewels and the Bermuda Triangle-esque logo.

And as a nice touch the  pack will drop in an oversize custom box complete with foam padding and embossed with the project’s trademark diamond ‘shark attack’ logo.

These will be dropping this Saturday November 23rd on the Sneaker Freaker Webshop with a November 30th global release.

Check out the interview with Sneaker Freaker’s Woody and Jon Tang from Puma on the next few pages along with some amazing shots of the shoes.